Sylvie Leber is a socially active retiree with lots of friends and hobbies to keep her busy. But for her and the two million people who live alone in Australia, the coronavirus-imposed shutdown meant many of those networks became inaccessible.

“Initially, I thought life had become really surreal. There was a period of separation,” says the 69-year-old from Brunswick in Melbourne.

Her neighbours soon came to the rescue.

“Previously I’d just walk past Thomas’s house to go to the train or shops, now I stop every time I see him and we chat over the fence.” Ms Leber has made friends with her Italian neighbour Thomas Roberto, 33.

Before long, Ms Leber was deepening her connections with others around her too.

She plays the guitar and so invited two of her neighbours for a socially distanced jam session on the porch. Someone in her block also came to fix her exercise bike and a local friend left crosswords on her doorstep every week.

Originally from Veneto in Italy, Mr Roberto says it has been nice to get to know his neighbours better over the past few months.

“One of my first goals when I came to Australia eight years ago was to learn enough English so I could have a conversation and be connected to the people around me, be part of the community,” he says. 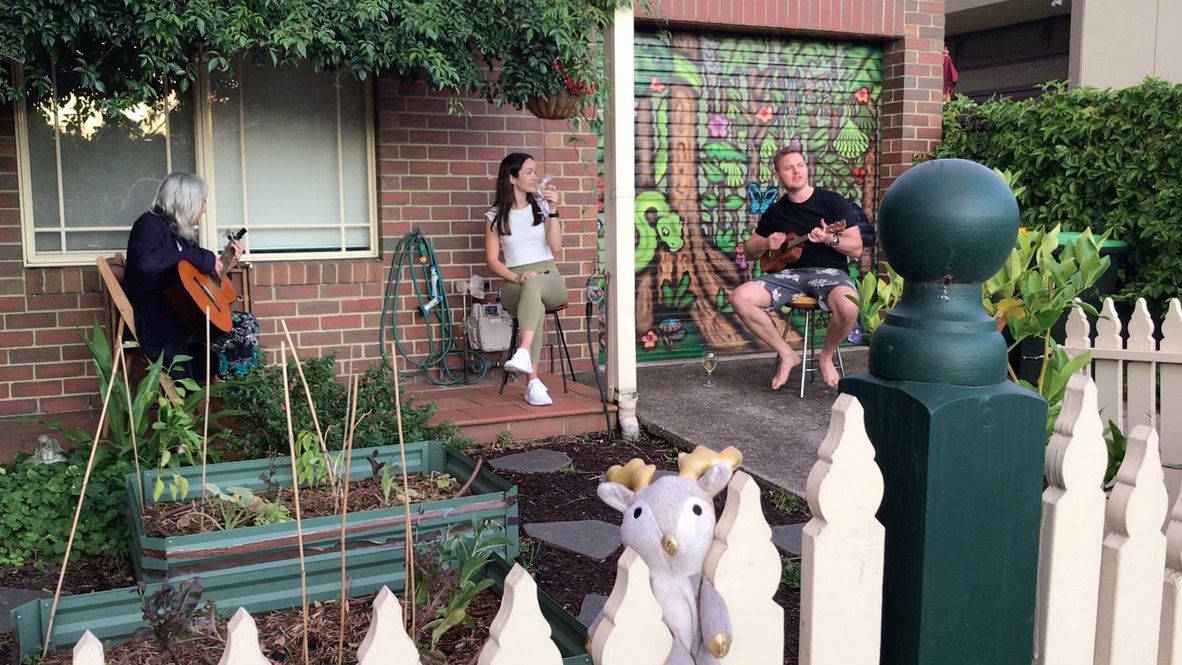 Ms Leber and her neighbours having a socially-distant jam session.

Social isolation is not a new phenomenon. Half of Australians feel lonely for at least one day a week according to the Australian Loneliness Report, released in 2018 by the Australian Psychological Society and Swinburne University.

Feelings associated with loneliness include individuals feeling their interests are not shared by those around them, lacking companionship, or feeling that there is no one to turn to. Nearly half of those surveyed said they had no neighbours they felt they could call for help.

The proportion of people living alone in Australia is projected to rise to between 2.8 million and 3.7 million by 2026, according to the Australian Bureau of Statistics. By 2021, up to 24 per cent will be Australians aged 75 and over, three-quarters of whom will be women.

Community at a local level adds a different layer of connection, but most don’t feel so comfortable about reaching out to their neighbours, Dr Lim says.

Kate Dundas was a proponent of localism before the COVID-19 pandemic hit. The 39-year-old from Scotland, along with a group of others from Melbourne, started the neighbourhood connection project 5Up5Down in 2018.

The name comes from the idea of connecting with five neighbours up, and five down the road or stairs.

She says they became aware that a lack of contact with others has a significant negative impact on health and wellbeing but it wasn’t something online connections could easily fix.

Shortly after the restrictions were announced, Ms Dundas began dropping notes to invite her neighbours to join a WhatsApp street group. She says even if not everyone in the group is active, people still benefit from knowing there are people nearby who are willing to help.

A sense of belonging, of shared purpose, can and should start where people live in order to future proof us, she says.

Northcote 41-year old Liz Sherry’s dream of being part of a community also started taking shape during the lockdown.

“As an introvert, the prospect of social isolation wasn’t too concerning for me. But as it progressed, even I found it a little bit difficult,” she says. “I realised I need some sort of interaction beyond online. It’s great having video chats but it’s not the same.”

“My neighbours are here now. They may have been here before, but I wasn’t as aware of it.”

She thinks they’ll stay a more connected group now the restrictions have eased. It helps that they’ve also started a community garden together. Liz Sherry, 41, got involved with a community garden project to stay connected to her neighbours.

Ms Sherry says the impact of COVID-19 has given people permission to be caring without appearing nosy. It made it acceptable to check in on each other as a normal neighbourly thing to do, she says.

But will our newfound local connections take a back seat again as Australia gets back to ‘normal’? Ms Dundas is hopeful that won’t be the case.

“People don’t have a lot of time. And when they do, they don’t necessarily want to commit to going knocking on their neighbour’s door,” she says. “But I also think people have enjoyed connecting more with their local community and seeing value in it, probably for different reasons for everybody. I think it’s up to us to refuse to go back to the way things were.”

Dr Lim and her colleagues are now running a global study on social isolation, loneliness and the impact of COVID-19 on health and wellbeing.

She says people need routine and practice to make long term behaviour change possible. We need to make checking in with our neighbours, particularly those who live alone, part of our regular behaviour.

“If we have those things in our routine, they’re not going to feel effortful. They’re actually going to give us pleasure and help us live a more meaningful life.”

Antoanela Safca is a Romanian-born freelance writer based in Melbourne.

People in Australia must stay at least 1.5 metres away from others. Check your state’s restrictions on gathering limits.

Testing for coronavirus is now widely available across Australia. If you are experiencing cold or flu symptoms, arrange a test by calling your doctor or contact the Coronavirus Health Information Hotline on 1800 020 080.

The federal government’s coronavirus tracing app COVIDSafe is available for download from your phone’s app store.

SBS is committed to informing Australia’s diverse communities about the latest COVID-19 developments. News and information is available in 63 languages at sbs.com.au/coronavirus