Niesha Stanley is an anomaly. The 34-year-old has lost 45 pounds in recent months, while many gained the infamous “Quarantine 15,” a term to describe the weight gain some have experienced while isolating.

She did it through a combination of a plant-based diet, running, and virtual and outdoor classes through Live Cycle Delight, a fitness studio in the West Village neighborhood of Detroit.

Still, Stanley was at Live Cycle Delight’s 9 a.m. cycle class Wednesday, the first class that owner Amina Daniels has offered indoors since the studio shut down in March.

“The energy is back and I love it,” said Stanley, a resident of Redford, a 40-minute drive from the studio.

More: Michigan gyms can reopen Sept. 9: What you need to know

Wearing a mask while doing a high-intensity workout like cycling is going to take some getting used to, clients of Daniels said. Natasha Vranic, 31, said she’s going to wear a cloth mask next time, because her paper, disposable mask was soaked.

Still, Vranic of Madison Heights said the class was “awesome.”

“I always feel super good about myself after coming (to class),” Vranic said.

That’s the reason engaged couple Danielle Champlin and John Marvin were working out together at Life Time Fitness in Rochester Hills early Wednesday morning. Champlin and Marvin are trying to get back to their normal routine, and get in shape before their wedding in May. They were excited to join Life Time Fitness because it’s close to their house. 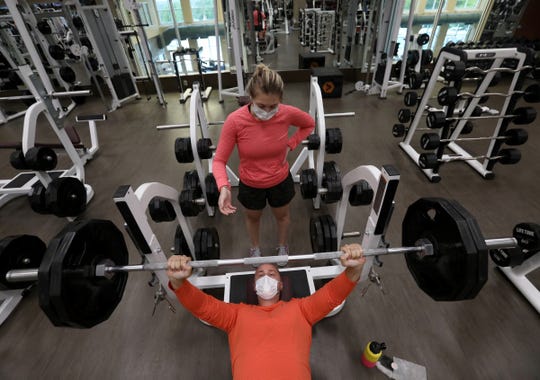 Danielle Champlin, 29, spots her fiance, Joshua Marvin, 30, on Wednesday at the Lifetime Fitness in Rochester Hills. This was the first day that fitness centers and gyms in lower Michigan opened up at 25% capacity since the coronavirus pandemic hit. Lifetime Fitness has many hand sanitizer stations, signs about wearing masks while social distancing and requires people to take a temperature scan at the front desk before heading in to work out. (Photo: Eric Seals, Detroit Free Press)

After doing 45 minutes of upper body and abdominal work, Marvin, 30, said his mask was collecting sweat.

“It’s fine until it gets to that point though,” he said.

Everyone at Life Time Fitness was wearing a mask Wednesday morning. About half of the workout equipment was blocked off, and there was ample room to social distance. There was one member swimming laps in the pool, which opened up Wednesday, and the tennis courts had three reservations in the system for the day.

About 40 clients visited the gym before 7:30 a.m., a fraction of the 2,500 members who would typically visit the club in a day prior to the pandemic, according to Jesse Brandyberry, an area director for Life Time Fitness who oversees the Michigan and Ohio clubs. 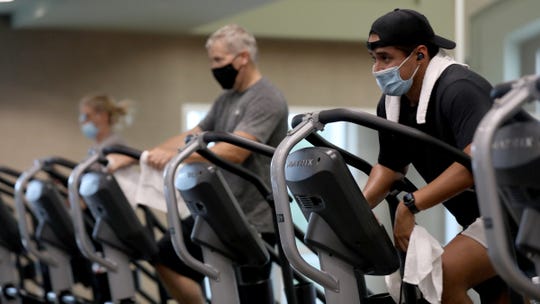 Ed Grijalva, 22, of Rochester Hills in the middle of doing 30 minutes on the stair machine Wednesday at the Lifetime Fitness in Rochester Hills. This was the first day that fitness centers and gyms in lower Michigan opened up at 25% capacity since the coronavirus pandemic hit. Lifetime Fitness has many hand sanitizer stations, signs about wearing masks while social distancing and requires people to take a temperature scan at the front desk before heading in to work out. (Photo: Eric Seals, Detroit Free Press)

Brandyberry expects traffic to pick up, but he understands older individuals, or those in high-risk populations, may be nervous about coming back into a gym. That’s why Life Time is going to continue to offer outdoor classes, which are scheduled through early October, and keep the outdoor pool open through the end of this month.

Prior to COVID-19, the large LA Fitness on Woodward in Royal Oak was one of the busier gyms in metro Detroit.

Early Wednesday, members said there were less than half as many people inside working out than before the pandemic and the governor’s order shutting down all Michigan gyms.

Evan Vallis, 24, of Royal Oak said the gym’s staff hands everyone who walks in a personal bottle of disinfectant for carrying around and spraying down each piece of exercise equipment that they use.

“I don’t feel at risk or anything of the sort,” he said.

Mike Finley, 36, also of Royal Oak said he had been driving to Toledo three times a week all summer to work out at gyms there, after Ohio’s governor allowed gyms to reopen in late May.

“A little crazy, but yeah,” Finley said of his fitness trips, which took about an hour in the car. 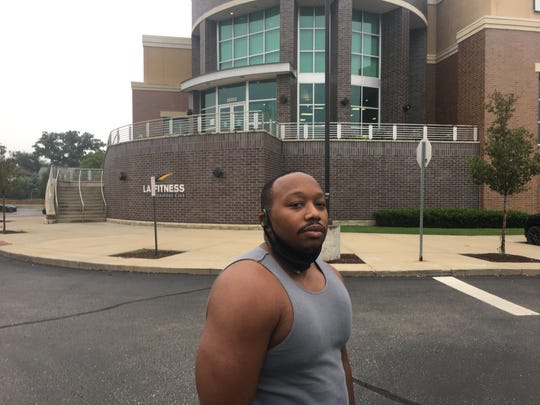 Mike Finley worked out Wednesday morning at the LA Fitness in Royal Oak. He had been driving to Toledo three times a week all summer to visit Ohio gyms. (Photo: JC Reindl)

“This is five minutes,” he said of his drive to the reopened LA Fitness, “so there’s no excuse to ever miss the gym.”

Lower Michigan gyms anticipated reopening June 25 under a decision by a federal district court judge, but in an eleventh-hour ruling, a three-judge panel of the U.S. Sixth Circuit Court of Appeals kept Whitmer’s closure order in place.

A few metro Detroit gyms stayed open in defiance of the orders.  Because enforcement is up to local authorities and prosecutors, some localities allowed the disobedient gyms to operate.

Members of these rogue gyms tended to be younger people, generally 18 to 35 years old, and they would commonly remove their face masks when using cardio equipment such as treadmills.

Several large chains told the Free Press this week that all or nearly all of their locations are reopening.

For a few gyms, the nearly six months of closure were too long and financially damaging. The gyms that are permanently closing include the Powerhouse Gym in Lake Orion and the FitnessWorks in Detroit’s New Center.

Daniels, the owner of Live Cycle Delight, said she’s just barely getting by. She’s down from 120 clients who paid a monthly membership before the shutdown, to 10. She lost 20 clients to the Peloton exercise bike alone.

“I am still looking into how we can elevate the live experience,” said Daniels. She’s planning on keeping outdoor classes going as long as possible, and considering buying space heaters for her outdoor space to extend those classes even further into fall.

But all this takes money, and revenue is down 78% year-to-date compared with the same time last year. Daniels is looking into buying dividers for her cycling and yoga studios.

“Even in quarantine you just spend more money, and we’re not making any money but it’s still all about safety,” she said. “We have extra masks and we bought new cleaning equipment. But people still don’t feel comfortable.”